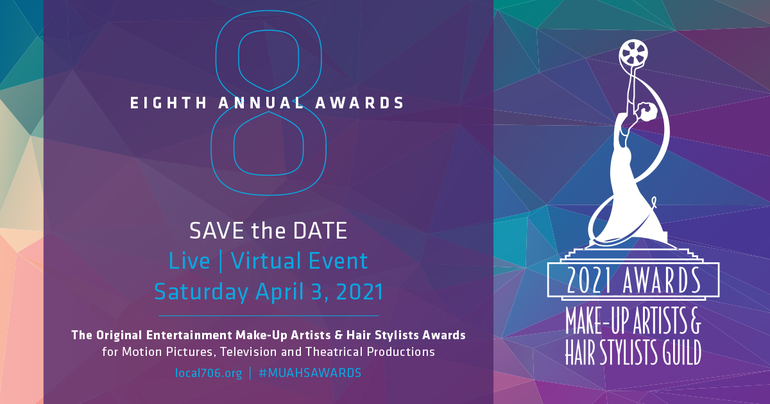 LOS ANGELES, March 2, 2021—Award-winning actor Eddie Murphy, best known for his work in the films Coming to America, Beverly Hills Cop, The Nutty Professor and Dreamgirls, among many others, will receive this year’s Distinguished Artisan Award at the 8th Annual Make-Up Artists & Hair Stylists Guild Awards (MUAHS, IATSE Local 706) celebrating the prolific spectrum of his versatile four-decade acting career on screen and television. Presenting the Distinguished Artisan Award to Murphy will be Arsenio Hall, star of Murphy’s upcoming movie Coming 2 America. For registration and information: https://local706.org/8th-annual-muahs-guild-awards/.

The reimagined awards gala, honoring outstanding achievements of both make-up artists and hair stylists in motion pictures, television, commercials and live theater, will be held virtually on Saturday, April 3, 2021. The announcement was made today by Julie Socash, President of IATSE Local 706.

"From The Nutty Professor to Prince Akeem, Eddie Murphy is a legendary actor whose myriad of characters live in our hearts forever. He has expertly created memorable personalities in numerous award winning films, often portraying multiple characters in the same film. This award recognizes all the hours that he has spent in the make-up chair collaborating with our talented and innovative make-up artists and hair stylists, and we celebrate these great relationships and Eddie’s enormous talents," said Socash.

Eddie Murphy is the most commercially successful African-American actor in the history of the motion picture business, and is one of the industry’s top five box-office performers overall. At the tender age of 59, Murphy is on the very short list of actors who have starred in multiple $100 million pictures over the past three decades, from Beverly Hills Cop to Daddy Day Care.

Murphy was most recently seen portraying the legendary underground comic personality Rudy Ray Moore in Dolemite Is My Name from Netflix, a performance which garnered him widespread critical acclaim as well as a Golden Globe nomination for Best Actor – Motion Picture —Musical/Comedy and a Critics Choice Association nomination for Best Actor. He also recently received an Emmy Award for Outstanding Guest Actor in a Comedy Series for his return to his comedy alma mater, Saturday Night Live.

In 2007, Murphy received rave reviews and critical acclaim for his portrayal of James "Thunder" Early in the Dreamworks film Dreamgirls, a performance which would garner him the Golden Globe, Screen Actors Guild and Broadcast Film Critics Association Awards for Best Supporting Actor in a Motion Picture, as well as earning him his first Academy Award nomination in the same category.

He is also the voice of Donkey in the Oscar®-winning animated film Shrek and its sequel, Shrek 2, which is the top-grossing animated film of all time. Murphy won an Annie Award and earned BAFTA and MTV Movie Award nominations for his performance in the first Shrek, and reprised the role of Donkey in the final installment of the hugely successful franchise, Shrek Goes Fourth. Murphy began his career as a stand-up comedian 45 years ago. In 1980, at the age of 19, he joined the cast of Saturday Night Live, and has since gone on to establish a successful career on the big screen.

In 1989, Murphy made his directorial debut with Harlem Nights, a period comedy he also wrote and starred in, opposite Richard Pryor and Redd Foxx. In addition, Murphy starred in and produced the hit comedy Life, co-starring Martin Lawrence, and starred opposite Steve Martin in the comedy Bowfinger. He was also the voice of Mushu the Dragon in the successful animated epic Mulan.

In 1996, Murphy portrayed seven different characters in the worldwide box office smash The Nutty Professor, for which he received another Golden Globe Award nomination. He added a character to play a total of eight roles in the sequel, Nutty Professor II: The Klumps, co-starring Janet Jackson. He also starred in Dr. Dolittle 2, Daddy Day Care, The Haunted Mansion, the romantic comedy Norbit — in which he played three characters as well as serving as the film’s producer and screenwriter, the caper comedy Tower Heist opposite Ben Stiller, and the drama Mr. Church.

The Make-Up Artists & Hair Stylists Guild’s Distinguished Artisan Award is given annually to those whose body of work in the film and television industry was richly enhanced by the consistent collaboration of make-up and hair styling artistry creating memorable characters throughout their career. Previous recipients include Sir Patrick Stewart, Melissa McCarthy, Gary Oldman, Johnny Depp, Ryan Murphy and Guillermo del Toro.

ABOUT LOCAL 706:
The Make-Up Artists and Hair Stylists Guild (IATSE, Local 706) was chartered in November 1937. Today, their diverse membership includes over 2,400 artisans in the entertainment industry worldwide. Local 706 members are make-up artists and hair stylists who have created the looks for Hollywood’s most memorable characters and stars of stage, screen, television and now the internet. The wide-ranging domains of these artists include feature films and television, commercials, "live" network television, all types of theatrical productions, and Disneyland theme parks. Local 706 Members have created notable characters competing for Academy Awards®, Primetime Emmys®, Daytime Emmys®, Saturn Awards®, BAFTA Awards®, and many other honors for make-up and hair styling artistry including their own Make-up Artists and Hair Stylists Guild Awards. The Local 706 Guild publishes The Artisan, a glossy quarterly magazine, and provides panels, workshops and training both for members and others interested in the field to foster a spirit of innovation in the craft. For more information, visit local706.org or get #MUAHSawards updates on Facebook , Twitter and Instagram. 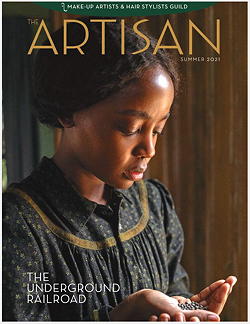